Great news... our Facebook Group has gone public. Stay abreast of all the things OOPS members are doing and creating on a daily basis by following and/or joining our group page....

OOPS December Paint Out / Cook Out this Sunday, December 5th.

WHAT: OOPS! December Paint Out / Cook Out

WHEN: Sunday, December 5, 2010 from 1PM until... This date and location was organized by Pat Boni.

WHERE: OOPS Member, Kit Williamson's House on the Waterway in Carteret. (Directions listed below)

WHAT ELSE: We will have a cook out if enough people are interested. By now you have contacted Pat Boni with your intentions... an email was sent out to all members over a week ago... remember???? :) If you haven't contacted her do so today at (910) 330-3143. We need a head count and food list.

Newbies welcome... all mediums and skill levels... simply show up with your gear and be prepared to have fun!

What the heck is OOPS and how do I join the FUN?

Posted by Bernie Rosage Jr. at 7:24 AM No comments:

Plein Air tips from my friends at Plein Eire

Most of you know my love of plein air painting and anything Irish (my wife is included in this category). I am a member of PLEIN EIRE, a superb site for outdoor painting in Ireland. Plein Eire is an organized group of artist from Ireland who are extremely talented and passionate about plein air painting. Check out their forum for some great discussions and view their lovely artwork.

Here are some great tips from their site...

Posted by Bernie Rosage Jr. at 6:11 AM No comments: 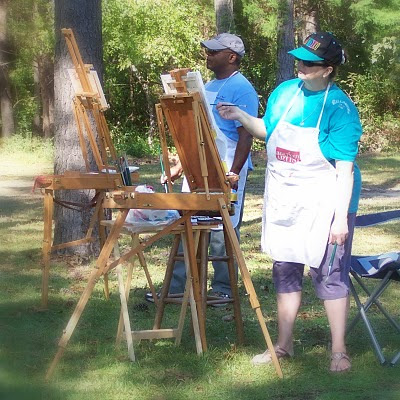 “We only go around once in this life and I want my audience to stop, take notice and think-not so much my thoughts, but what the painting inspires them to think or enjoy. Life is full of beauty despite all the “ugly” I choose to try to capture the beauty. I want my life’s walk to be in beauty and color.”

Bobbie Mayes was born in Dearborn Michigan, the daughter of WWII Veterans. Mayes’ Father was a refugee from Poland. Her father later became a Psychiatrist. As a child, Bobbie loved to draw and her career as an artist began when she won first place for sculpture at a competition in Boyne Highlands Michigan, Bobbie graduated from Petoskey High School as a National Honor Society recipient. She was an exchange student to Montevideo Uruguay. As a military wife, Bobbie has traveled extensively. Having lived in Japan for three years, and three years in California’s Mojave Desert, where her love for the southwest began. In Taos, New Mexico she studied, painting and weaving, at the Taos Art institute under the instruction of the Navajo master artist Pearl Sunrise. Her husband’s military retirement currently provides Bobbie opportunities to embrace ocean scenes into her body of work.

Bobbie was educated at the following Universities: Saddleback College, College of the Desert, University of Maryland-graduating cum laude, and Golden Gate University -Graduate degree-M.S. Her pursuit of education lead to a varied work career as a: nurse, art teacher and mental health therapist. However, art has always called to her and she has answered the call. Primarily self taught, Bobbie received artistic training at the Interlochen Center of the Arts, in Michigan. Bobbie credits her artistic abilities to being born into a family of artists and musicians who valued the pursuit of the arts and encouraged her to paint. The highlight of Bobbie’s career was being invited, as a special guest and to display her work of Leon for the press opening of the show, at the North Carolina Museum of Arts (Raleigh) exhibition The Naked Soul, in May of 1993. Her great uncle, Leon Wyczolkowski, was one of the featured artists represented. Leon was a renowned impressionist in Poland who was a colleague of Claude Monet. As an emerging artist, Bobbie has been involved with local shows in Jacksonville, N.C. Her art can be found in private collections in Boston, New York, New Mexico, Korea, Florida, Chicago and California.

Despite the long road to recovery from a life threatening brain tumor, eight years ago, Bobbie has remained true to her art. Her bold use of vivid colors reflect the boldness she has experienced in her life.

You can contact Bobbie at southwestinspiration@yahoo.com
Posted by Bernie Rosage Jr. at 2:33 PM No comments:

We had a great time yesterday at the Humphrey Pond... the color was awesome! A special thanks to Doris Humphrey for allowing us to paint at her beautiful pond.

Details for our December Paint Out (Dec 5th) at Kit's House on the Inland Waterway coming soon. 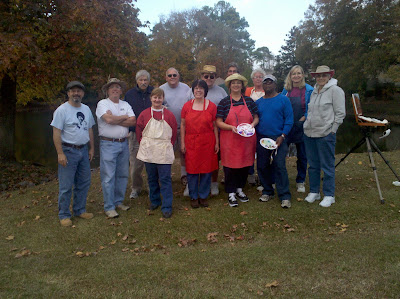 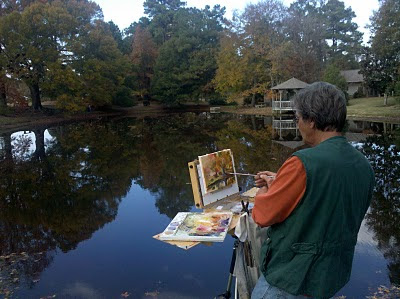 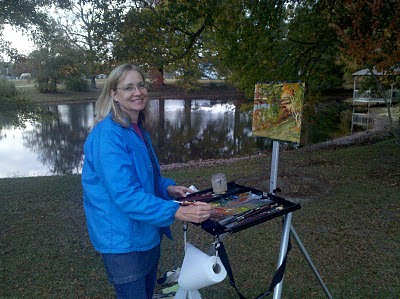 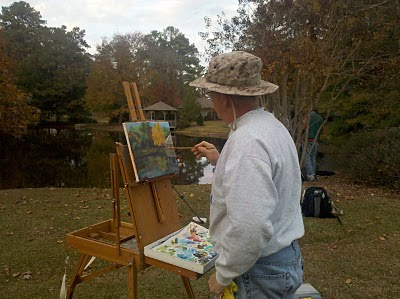 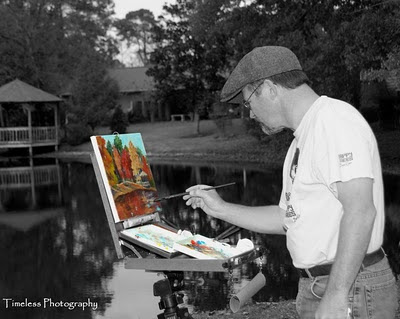 Bernie... cool photo by Dee Bledsoe of Timeless Photography who had a sitting at the pond while we were painting.... her son, Colby took our group photo... Thanks Colby! 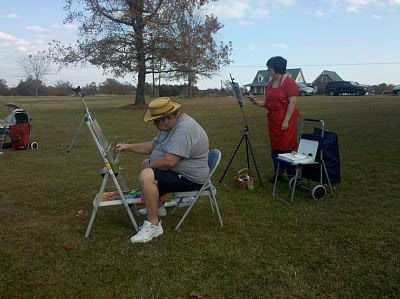 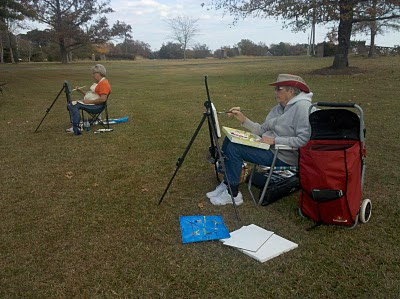 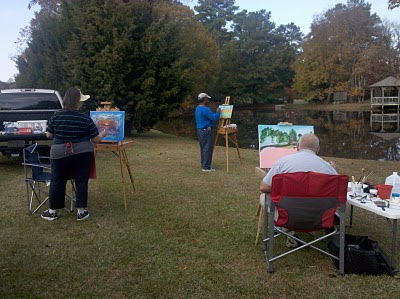 OOPS Artists step back in time...

Several OOPS members enjoyed a day of plein air painting and history at their additional October paint out at Hammocks Beach State Park. The paint out was in conjunction with a Civil War living history program put on by the Jacksonville, Pelletier, and Morehead City Sons of Confederate Veterans organizations. 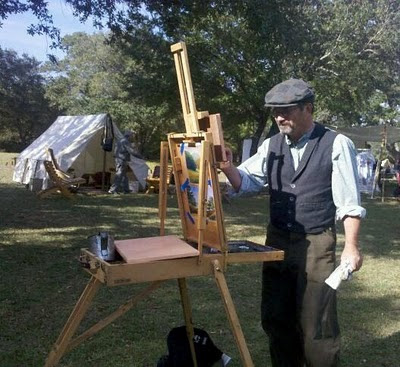 Bernie dressed as Claude Monet in the 1860's. 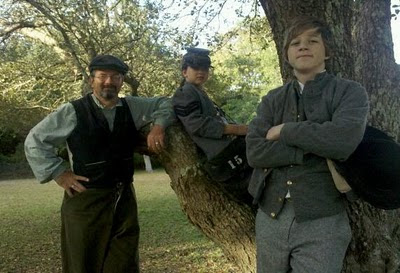 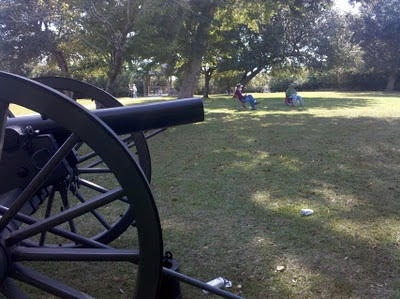 Is that Terry, Bonnie, and Ann in the background? 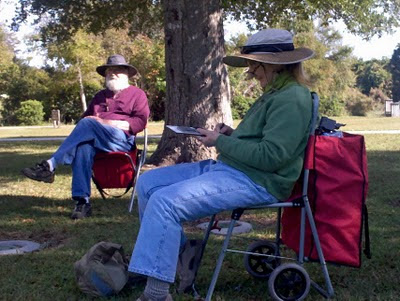 Terry and Bonnie enjoying the outing. 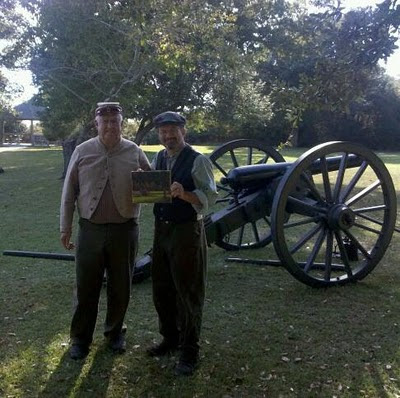 Bernie gave his painting to Charlie Wilton... cannon owner and Commander on the artillery battery. 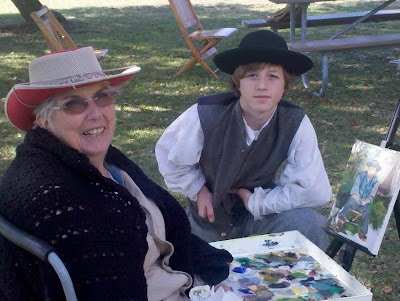 Pat painted a portrait of Christian. 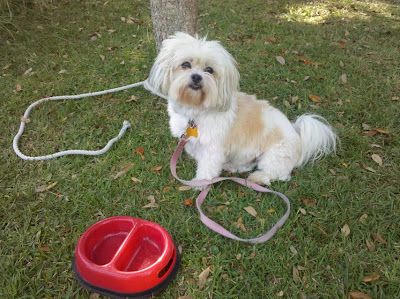 Rosie even had a great time. 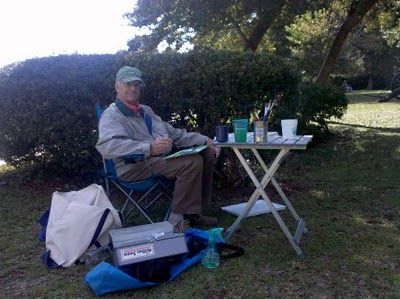 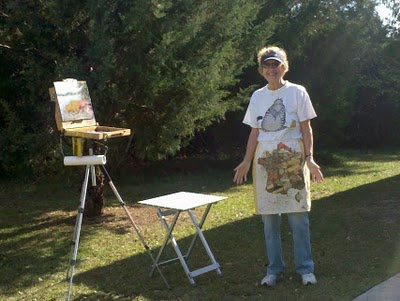 Ann at her second spot... the tide came in on her in spot number one! 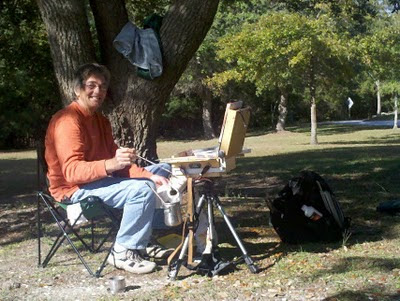 Mitchell found a shady spot to paint from.
Posted by Bernie Rosage Jr. at 3:40 PM No comments:

Get the latest news from OOPS!

The Onslow Outdoor Painters Society (OOPS!) is a gathering of artists from Onslow County, North Carolina, with one purpose... carrying on the tradition of painting "En Plein Aire"... a French term literally translated "In Open Air". We have no officers, no membership dues, no by-laws, etc... we simply gather on appointed dates for "paint outs" enjoying the fellowship of like minded individuals sharing the same passion... plein air painting.

No membership dues!
No by-laws!
No monthly meetings!
No elected officers!
No Robert's Rule of Order!
No roll call!

Membership is simple...
Any artist who loves painting "en plein aire" and lives in Onslow County, NC. We welcome all skill levels and mediums... we'll even welcome artists from surrounding areas if they're nice... :)

So when do we meet?
We gather at "Paint Outs"... date and location (within the county) predetermined where we simply fellowship and PAINT! "Paint Outs" occur approx. once a month.

Email Bernie Rosage if you are interested in joining or have any questions... bernierosage@gmail.com